Benjamin J Butler is Wonderfruit’s resident wizard. He is a leading Futurist, Strategist and Philosopher based in Asia. He is affiliated with the World Economic Forum, Bridge Consulting, Futur/io, and the Lifeboat Foundation. He is co-host of the soon-to-be-launched Quantum Futures podcast. Benjamin presented a Scratch Talk at Wonderfruit in 2019.

“A friend of mine once sent me a postcard with a picture of the entire planet Earth taken from space. On the back it said, ‘Wish you were here.”

The human journey is interwoven with that of the collective journey. As last week was Earth Week, and 50 years since the establishment of Earth Day, I thought I would give you my story about encountering Gaia (Mother Earth) and the future prospects of planet Earth.

It was 2014 and Danielle and I had decided to do a road trip up the Pacific Coastal Highway from San Diego to Seattle. We weren’t doing drugs or anything, but I certainly felt like one of the beat poets of the 1960s or 1970s, when the environmental movement kicked off. When I am in California my mind often drifts off to that period. Although I am an Englishman and a lover of history and tradition, I also love the freedom of California and the fact that it has little modern history. Life is kind of an open road.

‘…the only people for me are the mad ones, the ones who are mad to live, mad to talk, mad to be saved, desirous of everything at the same time, the ones who never yawn or say a commonplace thing, but burn, burn, burn like fabulous yellow roman candles exploding like spiders across the stars and in the middle you see the blue centerlight pop and everybody goes ‘Awww!’”
― Jack Kerouac, On the Road

We had some real adventures befriending people all along the journey, sleeping in monasteries in the desert, staying for two weeks in a Zen temple in the middle of Las Vegas, and even marrying a couple on the cliffs of Big Sur. The trip culminated in a chance encounter with the great great great great great grandson of Chief Seattle, whose speech had moved us both to tears years before. When they were ordered to hand over their land to the President of the USA, the Chief gave one of the most powerful ecological speeches in history:

“Every part of the earth is sacred to my people. Every shining pine needle, every sandy shore, every mist in the dark woods, every meadow, every humming insect. All are holy in the memory and experience of my people. We know the sap which courses through the trees as we know the blood that courses through our veins. We are part of the earth and it is part of us. The perfumed flowers are our sisters. The bear, the deer, the great eagle, these are our brothers. The rocky crests, the dew in the meadow, the body heat of the pony, and man all belong to the same family. The shining water that moves in the streams and rivers is not just water, but the blood of our ancestors. If we sell you our land, you must remember that it is sacred. Each glossy reflection in the clear waters of the lakes tells of events and memories in the life of my people. The water’s murmur is the voice of my father’s father. The rivers are our brothers. They quench our thirst. They carry our canoes and feed our children. So you must give the rivers the kindness that you would give any brother. If we sell you our land, remember that the air is precious to us, that the air shares its spirit with all the life that it supports. The wind that gave our grandfather his first breath also received his last sigh. The wind also gives our children the spirit of life. So if we sell our land, you must keep it apart and sacred, as a place where man can go to taste the wind that is sweetened by the meadow flowers. Will you teach your children what we have taught our children? That the earth is our mother? What befalls the earth befalls all the sons of the earth. This we know: the earth does not belong to man, man belongs to the earth. All things are connected like the blood that unites us all. Man did not weave the web of life, he is merely a strand in it. Whatever he does to the web, he does to himself.”

I shall never forget the first time I read that speech. “Man belongs to the earth. All things are connected like the blood that unites us all.”

After spending time in the redwoods of Northern California, swimming with whales in the Pacific, wandering in the mountains, being moved to tears by the coastal vistas of California, Oregon, and Puget Sound, here I was with a real descendent of the land. I asked him about his tribal council and he told me about their decision-making process: they imagine how their ancestors 7 generations ago and their descendants in 7 generations would view the decision they make today. As a Futurist, this was deeply moving, how long term was our decision-making today? If your way of seeing the world was the same as theirs, of course your decision-making would take on a very profound and sacred dimension to it.

On that trip we also discovered we were pregnant and after getting back to Asia, Danielle gave birth to a beautiful baby daughter in January 2015. It was a water birth in a Korean hospital. I wrote in my diary at the time:

When Onei [her nickname at the time] emerged into the water the whole world seemed to go silent. All the medical staff were watching with bated breath. Then something huge came out of Danielle surrounded by blood, and after a fraction of a second we could make out arms and legs, a human form. Danielle cried out “onei” in joy. It was such a beautiful moment and I shall never forget it.

After weeks of over-thinking and analysis of different names and their meanings, we were both given clear signs that she was Gaya, a name inspired by both her European ancestry (Gaia) and her Asian ancestry (in a number of Asian countries it has connotations of the land: in Korea it means beautiful field as well as being a Buddhist Kingdom). I fell immediately in love with her, but I also intuitively felt her birth was symbolic of a new generation and a new era.

I became fascinated, almost consumed, by Gaia. What did the ancients mean by it? Who was this James Lovelock who invented Gaia theory? So from Hong Kong I travelled back to the UK in search of Gaia and James Lovelock. This great visionary scientist was already in his 90s and retired so I met his proteges, including Dr Stephan Harding who was established at Schumacher College in the UK, a brilliant scientific mind himself and a lover of Gaia.

The scientist and author Rupert Sheldrake once told me that for 99% or more of our history we believed that the entire planet was alive and an interconnected whole. Most cultures believed in some form of anima mundi: recent history was an aberration. Though the Scientific Revolution resulted in phenomenal progress in technology, we desacralized the world through reductionism and materialism. The guiding metaphor was the machine. The entire universe was one big machine: animals, plants, Earth. The Nobel laureate physicist Stephen Weinberg said “All the explanatory arrows point downward, from societies to people, to organs, to cells, to biochemistry, to chemistry, and ultimately to physics.” He also adds, “the more we know of the universe, the more meaningless it appears.” The more I thought about the ancient ways, and the more time I spent immersed in nature, the more it dawned on me why we were destroying our planet. Many of us were in pain as we led meaningless lives. Wasn’t the destruction of our planet merely a manifestation of that pain?

But we are at a turning point. The science is changing.

James Lovelock – The Galileo of Our Times

Lovelock did an amazing service to humankind so I feel absolutely blessed to have spent a year learning about his work from Dr. Stephan Harding. But first, one has to understand the greater context of the era in which Lovelock started his work. Minds were opening with the counterculture movement, civil rights, anti-war demonstrations, and of course the Apollo program. Rather poetically, by looking to the stars we were beginning to discover Earth. Our first colour photo of Earth was taken by William Anders on 24th December 1968 during the a lunar orbit on the Apollo 8 mission: 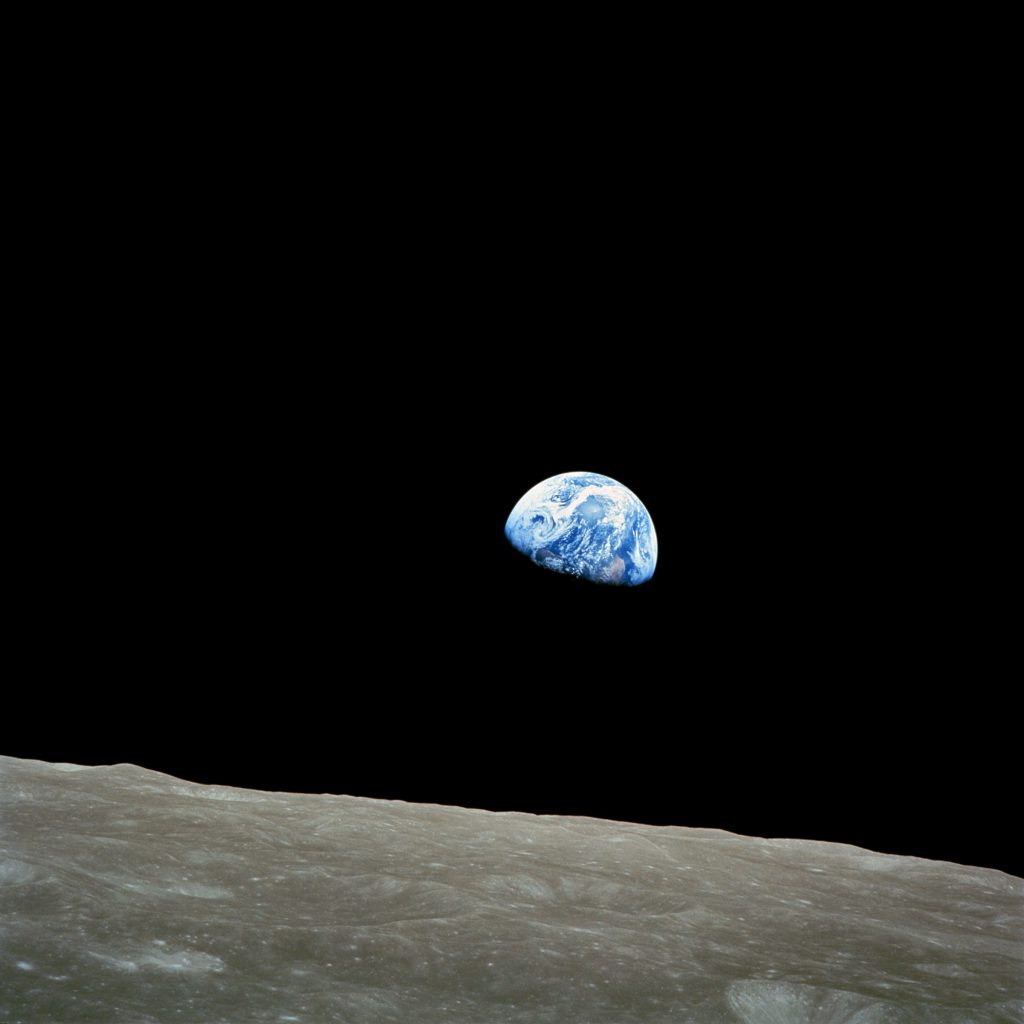 The astrophysicist Neil De Grasse-Tyson said about that moment: “A perspective descended upon us that forever changed us.”

It was the first time that we got to see our beautiful and borderless planet. And that new perspective led to a whole series of events and the creation of many institutions from the US Environmental Protection Agency to the Club of Rome’s famous Limits to Growth report in 1972. The ecological movement really kicked into gear.

Popular culture was also starting to pick up on the notion of a borderless world. The Futurist Stewart Brand created the Whole Earth Catalogue during this era, which was a powerful catalogue which Steve Jobs likened to Google in paperback. Stewart Brand was convinced that an image of the earth would catalyze a paradigm shift, and dedicated his magazine to human potential, technology and ecology. In 1970 Earth Day was created, which was to become the largest secular celebration on the planet.

So in the 1960s—with all this fascination with the cosmos—Lovelock had his first realisation.

He was actually studying the composition of the surface of Mars at the Jet Propulsion Lab. Then in his own words he had a revelation about Earth itself : the thought that “somehow life was regulating climate as well as chemistry at a comfortable steady state emerged in my mind.” Over millions of years even though the luminosity of the Sun had increased by 30%, the temperature of the Earth had been maintained within a narrow band. Using the new field of cybernetics he showed that this regulation happened through powerful feedback loops.  It was the first step towards a less reductionist view of the planet, and perhaps towards a notion that the Earth is one super-organism.

These theories have been significantly advanced since then. An article in the New York Times in 2019  highlighted how this Gaian way of thinking is now being understood more broadly in Earth System Science compared to when Lovelock made his first discoveries.

“Life in the Amazon does not simply receive rain—it summons it. All of that lush vegetation releases 20 billion tons of water vapor into the sky every day. Trees saturate the air with gaseous compounds and salts. Fungi exhale plumes of spores. The wind sweeps bacteria, pollen, leaf fragments and bits of insect shells into the atmosphere. The wet breath of the forest, peppered with microbes and organic residues, creates ideal conditions for rain. With so much water in the air and so many minute particles on which the water can condense, rain clouds quickly form.”

The article was called ‘The Earth is Just As Alive as You Are.’ It was published after I spoke at the United Nations, appealing for a new unifying narrative.

Finally, a new guiding metaphor better than the soulless machine could emerge.