In the extraordinarily complicated year of 2020, many of us turned inwards to search for grounding elements, subtle mundane things and relationships taken for granted amidst the world we previously recognized. Once we were slowed down, we learned to feel, see and listen, and appreciate little matters otherwise overlooked. The sounds of natural surroundings became amplified in a silenced urbanscape, and this became the backdrop for Sonic Elements, the search for one’s own sound discoveries within the system of natural elements that essentially bind all life—earth, water, metal, air and wood.

In that same year, we did an open call for sound artists to participate in a three-day workshop led by Nick Luscombe and James Greer from MSCTY Studio, field recordists Chris Watson, Kate Carr and Sirasar Boonma (Hear & Found), in which participants were asked to capture their own interpretation of the air element. From that, audio snippets and field recordings from every corner of this sparkly planet were used to form part of an immersive sound installation that first debuted at Moobaan Wonder in 2020.

Alongside this, the sonic workshop artists—Chris Watson, Kate Carr and Sirasar Boonma—each composed a soundscape dedicated to a natural element closely connected to their creative practice, and MSCTY Studio produced a sonic collage from the participants’ sound submissions.

For Wonderfruit 2022, we continue to work with MSCTY to expand and deepen the Sonic Elements concept on-site through sound art installations and live performances intermingled with field recording compositions and sonic workshops. In addition, we will be recreating the air element as well as adding a new installation around the wood element. Explore what we have in store below:

Sonic Path is a metal maze installation by Pin Metal Art inspired by the fluctuating wavelengths created by metal objects. A labyrinth of partitions is made from metal shards and lays a passage leading to a central dome structure that emits sound artist Kate Carr’s soundscape of metal journeys. The soundscape is overlaid with everchanging sonic moments from loose hanging metal components touched and moved by visitors and the blowing breeze. 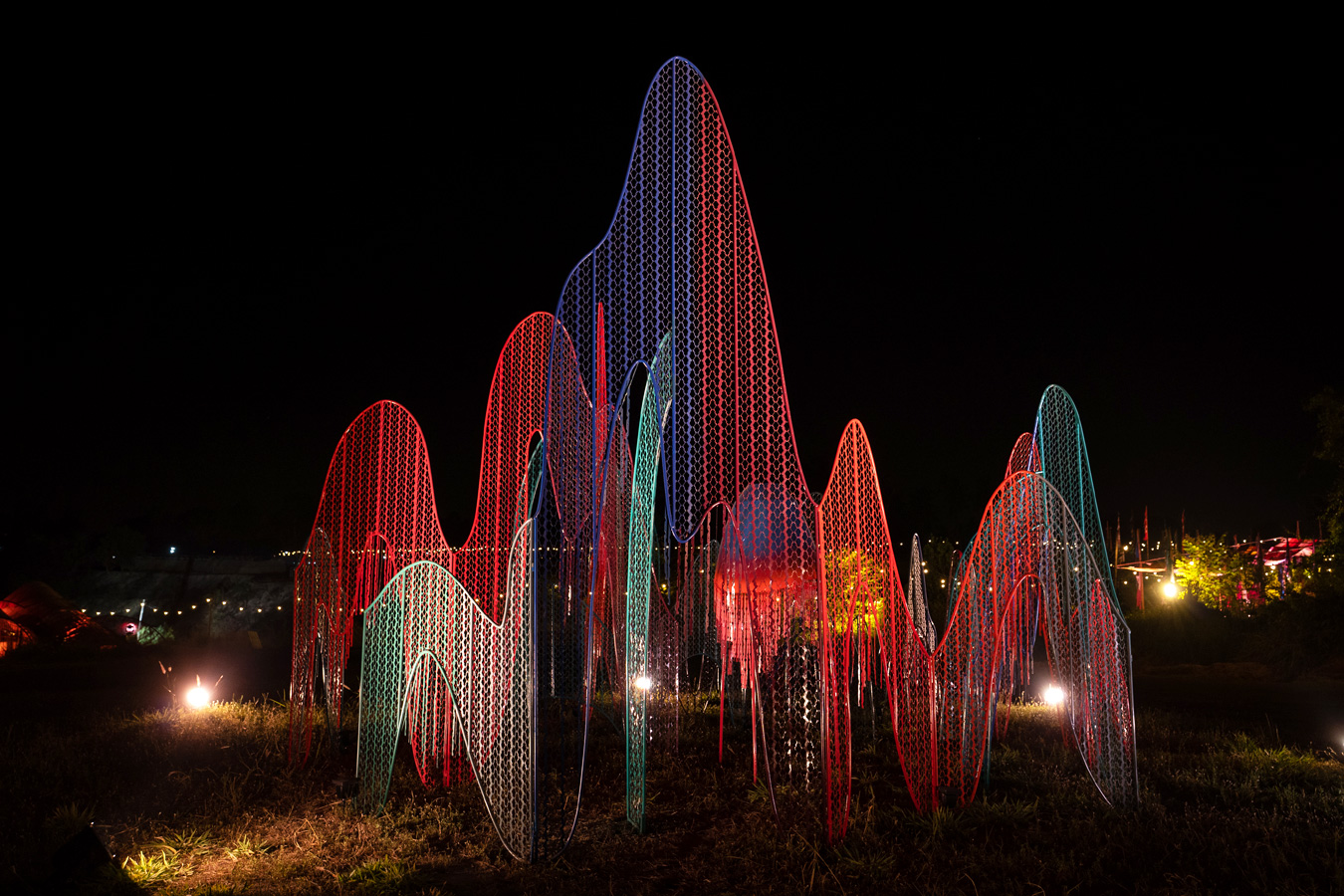 The piece takes the form of a journey into and between metallic sonorities. It is based on geophonic recordings of Kate Carr’s bicycle, which capture its vibrations and intensities as it moves. In this work, these trips morph into examinations of specific metallic resonances and structures: a communication tower in the jungle of southern Mexico resonating in response to birds landing on it; pipes from a raised highway bridge in Saskatoon, Canada; reverberating the journeys of commuters above; and a simple fence wire groans with tension as the wind forces it against a gorse bush in Scotland. It attempts to convey the surprising ways our built structures, animated by our own activities, those of other species, and even the wind and weather.

About the artists: Saruta Kiatparkpoom is an artist and designer based in Bangkok that grew up in a family-owned steel company. She founded Pin Metal Art studio and began working with metal. It was developed from the response to metal waste created from the fabrication processes by rethinking the value of off-cuts into sculptural and functional designs.

Kate Carr has been investigating the intersections between sound, place, and emotionality both as an artist and a curator since 2010. During this time, she has ventured from tiny fishing villages in northern Iceland, explored the flooded banks of the Seine in a nuclear power plant town, recorded wildlife in South Africa, in the wetlands of southern Mexico and in the bushlands of Australia.

An immersive journey into Chris Watson’s soundscape called Voices in the Humboldt Current, the Rueng Loy installation by Eyedropper Fill invites people to experience the sound piece in its most intimate space. Floating in the middle of the lake, the space acts as a fluid membrane of water surface, encouraging people to comfortably lie down and immerse in a 20 minutes sound journey of being one with water––both physically and spiritually. 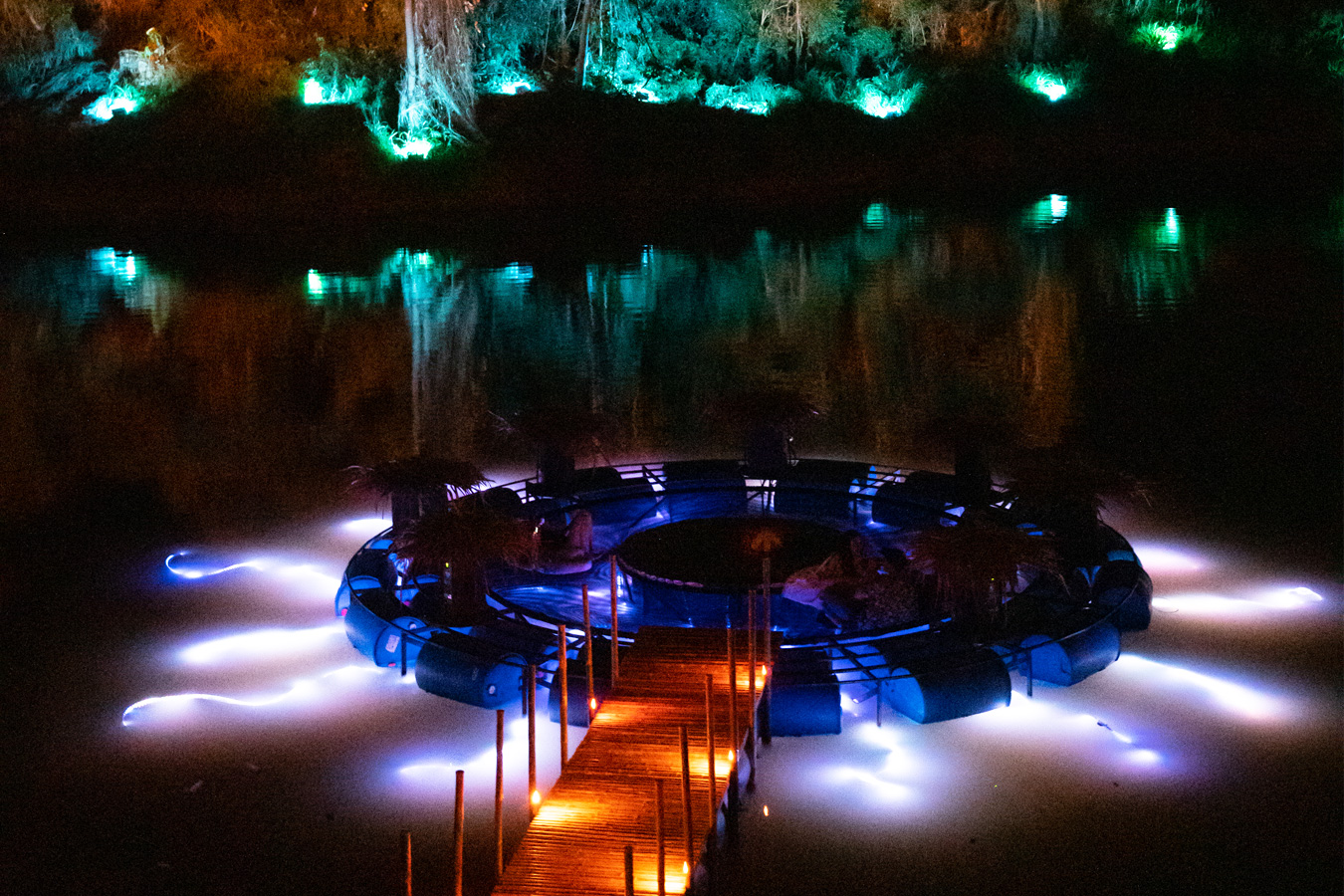 The soundscape, called Voices in the Humboldt Current, is a four-channel piece by Chris Watson celebrating the sounds, rhythms and music of the Humboldt current in the Pacific Ocean around the Galápagos Islands, which was recorded at night with a four-channel hydrophone array.

About the artists: Eyedropper Fill is a Bangkok-based creative and experience design studio specializing in moving-image production and multimedia installation. The studio uses a transdisciplinary approach to experiment and cross-collaborate between skills and media, resulting in moving images, interactive design, art installation, and experiential marketing.

Chris Watson was a founding member of the influential Sheffield-based experimental music group Cabaret Voltaire during the late 1970s and early 1980s. Since then, he has developed a particular and passionate interest in recording the wildlife sounds of animals and habitats from around the world. As a freelance composer and sound recordist for programs like BBC and David Attenborough, Watson specializes in creating spatial sound installations with a strong sense and spirit of place.

Embrace by Nanu Youttananukorn with Earth soundscape by Hear & Found

Embrace is a rammed earth pavilion built around a fallen tree, inviting listeners to navigate around the twist and turn of a majestic life form that was once standing tall in The Fields. The installation is inspired by the concept of Earth, and can be seen as a metaphor for decay, a transition of materials, and a return to mother nature. 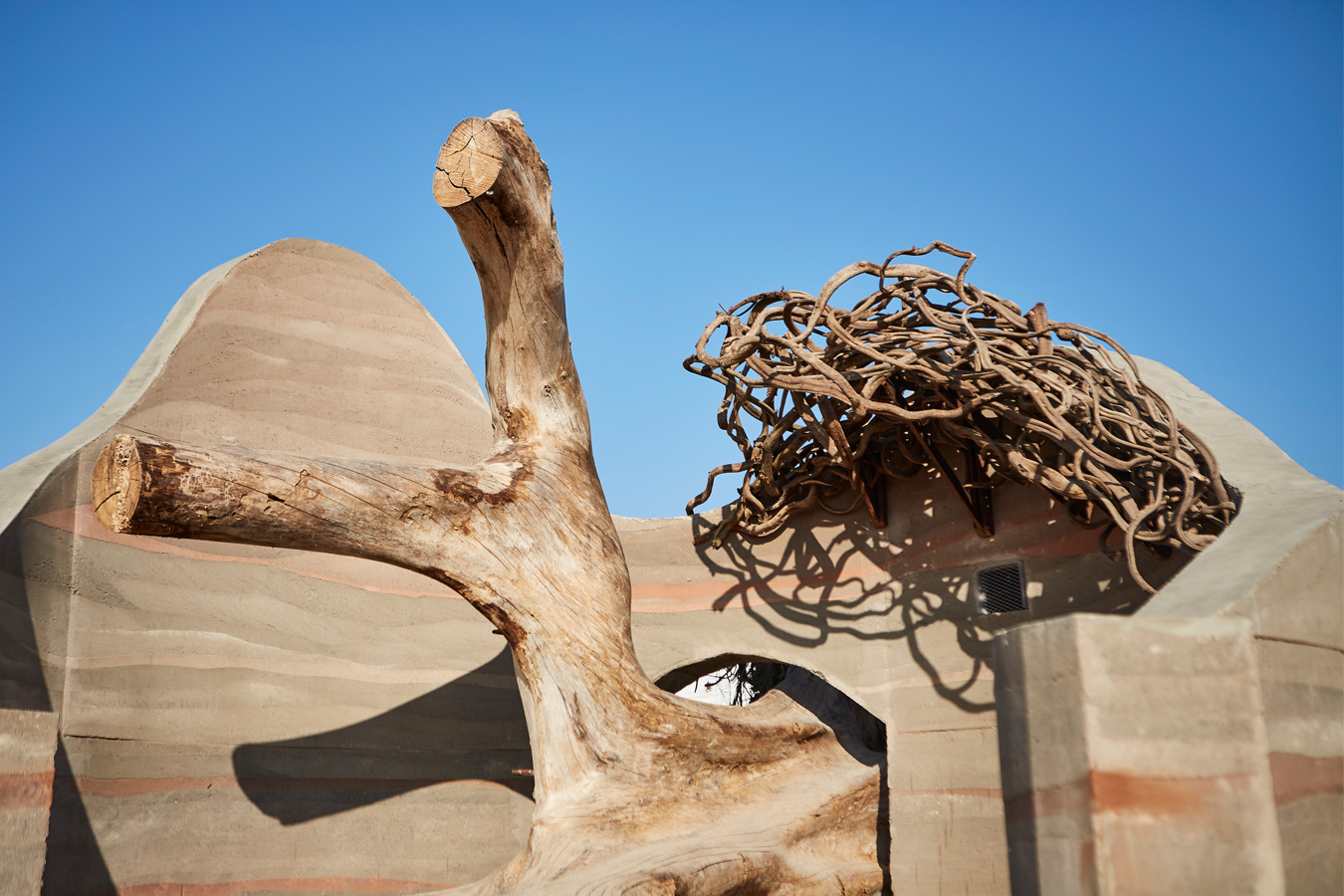 Its soundscape is composed by Hear & Found and is made from recordings of ceremonial natures from the ethnic minorities in Thailand, including Tai Song Dum, Muzer and Hmong. These ceremonial songs can be seen as living memories of their ancestors, kept alive by reciting, recycling and re-occurring in the rhythm of traditions. Convinced that there is life after death, often these chantings, songs and rituals are means of communication with the spirit—a mediation between the living and the sacred.

About the artists: Pakphum (Nanu) Youttananukorn is a multidisciplinary designer, artist and maker. His work varies from functional art to unique pieces of furniture and installations, all predominantly made out of wood. His designs investigate the intention and emotion of pre-existing objects, traditions and mythologies.

Sirasar Boonma (Mae) is the founder of Hear & Found, a Bangkok-based social enterprise that aims to erase the existence of discrimination, especially among indigenous groups, by bringing recognition and understanding through music, sound and creative approach. She is a sound artist, producing soundscapes and sound design that tell a story, especially about the local Thai ways of life.

Musicity, headed by broadcaster and Wonderer Nick Luscombe, last visited Wonderfruit in 2019 with a handful of UK’s Erased Tapes and Thai recording artists for Musicity x Wonderfruit x Bangkok. Seven original compositions were performed live on Theatre Stage and Creature Stage, then released online for visitors to explore the locations in Bangkok which inspired each piece. This was the beginning of our friendship with Nick Luscombe and Musicity, and an eye-opening introduction to the blossoming world of field recording and sound art. So when Nick brought a new project our way, under the newly-minted MSCTY STUDIO brand, we were immediately on board.